Theory of the Case

Deliver My Vote (DMV) set out to increase turnout among populations of traditionally disenfranchised voters in Pennsylvania, Michigan, and Florida. We developed layered relationships with infrequent voters, and followed up with them through multiple points of contact in order to support the implementation of their personal vote plan. This strategy increased their turnout rate and gave them confidence that their ballot would count and their voice would be heard.

In recognition that the 2020 General Election was likely to be increasingly characterized by confusion around voting options and requirements, especially new ones, voters remained in our target communication universe until we had confirmation of their ballot being cast.

DMV worked closely with in-state partners to design and execute a live call and SMS program that developed customized vote plans and directly confronted voter suppression tactics and confusion. We activated our previously-developed recruitment and training pipeline to produce an impressive paid team of over 200 canvassers with requisite knowledge and technical expertise, who calmly and confidently made vote plans with traditionally disenfranchised voters. Utilizing learnings from relational organizing, our callers were able to turn intimate conversations into detailed vote plans.

Central to our program was close collaboration with donors and partners to identify any systemic voting access issues as well as to share successful tactics that could assist parallel efforts. Specifically, the success of our work would not have been possible without in-state partners The Voter Project (PA), Engage Michigan, the Progress Florida Education Institute, and national partners, ProgressNow and America Votes.

Deliver My Vote provided infrequent voters with solutions and confidence. In the five weeks leading up to Election Day, we made over 6.4 million live calls and sent over 4 million SMS messages. Our canvassers had in- depth conversations with over 163,000 target voters and made detailed vote plans, including specific dates and times, with over 41,000 of them. Each of those voters then received follow up calls and texts from organizers to support the execution of their personal vote plan.

Post-election voter data from American Votes VAN shows a 17% increase in turnout among target voters who were contacted by DMV canvassers at least once throughout the program, as compared to the overall universe of low propensity voters. Narrowing this list further to target voters who DMV canvassers made detailed vote plans with shows a 22.5% increase in turnout as compared to the target universe.

In Michigan, DMV focused on two different target universes throughout the length of the program: An encouragement universe of likely voters, and a universe of infrequent voters, which post-election voter data from American Votes VAN shows is where our program made the largest gains in increasing turnout.

Post-election voter data shows a 13.8% increase in turnout among target voters who were contacted by DMV canvassers at least once as compared to the overall universe of African American voters targeted throughout the program. Narrowing this list further to voters who DMV canvassers made detailed vote plans with shows a 18.3% increase in turnout as compared to the target universe. 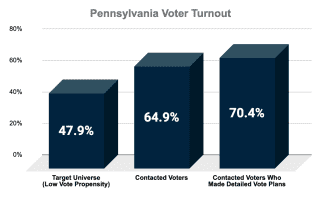 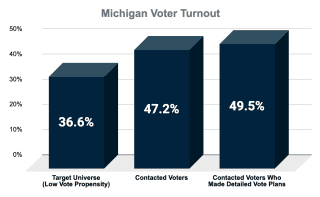 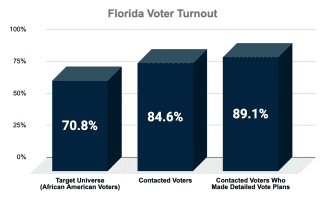